Amsterdam is a destination of hedonism and freedom that attracts travelers from all over the world. We’ve compiled all the insider knowledge you’ll need for a memorable trip to Amsterdam.

Special offers and deals for trips to Amsterdam 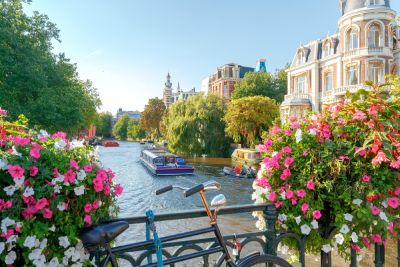 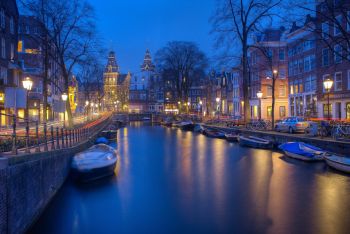 For couples or friends 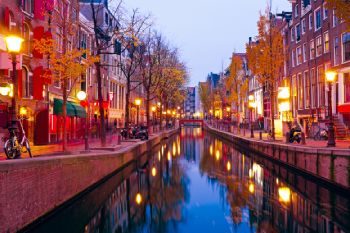 For couples or friends

The Dutch are a liberal, hardworking, but hedonistic people. They also have one very practical saying that describes their country well, and it says ‘Rotterdam works, The Hague rules, Utrecht prays, and Amsterdam enjoys.’

When you think about Amsterdam, the first things that come to mind are hedonism, sin, soft drugs, and prostitutes, but you should know that Amsterdam is so much more.

As you walk through the bustling city center today, it’s hard to imagine that it all started long ago in one of the villages along the Amstel River and the dam built on it when most of today’s Amsterdam was still underwater. This is where the city’s name originates from, as it literally means the Dam on the Amstel River.

During eight centuries, that fishing village was transformed into one of the Europe’s wealthiest cities with as many as two’ golden ages’ and survived numerous catastrophes, famines, and wars. It is recognizable by as many as 160 canals and over a thousand bridges, and it is often nicknamed ‘Venice of the North’. However, if we consider the numbers, it would be more logical to call Venice – Amsterdam of the South.

Amsterdam is also the European cycle capital, with cyclists covering 2 million kilometers each day, but what truly distinguishes it from the constellation of gorgeous European capitals is its superb museum offering. It is stated that Amsterdam has more museums than rainy days in a year, which amounts to over 180 pieces.

The most beautiful places in Amsterdam

What to visit in Amsterdam?

For every art lover, there is a place in Amsterdam where it all begins: the Museumplein.

Amsterdam and Netherlands’ most famous museums are around the vast square with a spacious park in the middle. At the head of the square, in an imposing building, is the Great Rijks. This national museum preserves the most valuable Dutch and European artworks from Vermeer and Bosch to the great Rembrandt, whose Night’s Watch attracts over two million visitors a year.

Not far from the Rijks are the Stedelijk Museum of Modern Art and the Van Gogh Museum, which hides the most extensive collection of works by the controversial Dutch genius. The cultural story of this place is closed by the Concertgebau, the most prestigious concern building in the country. Known for its fantastic acoustics and great Royal Orchestra, it attracts curious people from all over Europe. Conveniently, rehearsals of the already mentioned orchestra are open to the public and completely free.

Tickets for these three museums are around 17 euros each, but it is good to book tickets in advance online, and the I Amsterdam City Card will reduce the price if you plan to visit more than one. With these three large and prestigious museums in the city on the Amstel River, you can find museums dedicated to everything from prostitution, marijuana, beer, microorganisms to marine instruments, and believe us that each one of them is worth a visit.

We should not forget the Anne Frank Museum when we talk about museums. It is a half-hour walk from the Museumplein and requires a reservation several months in advance. 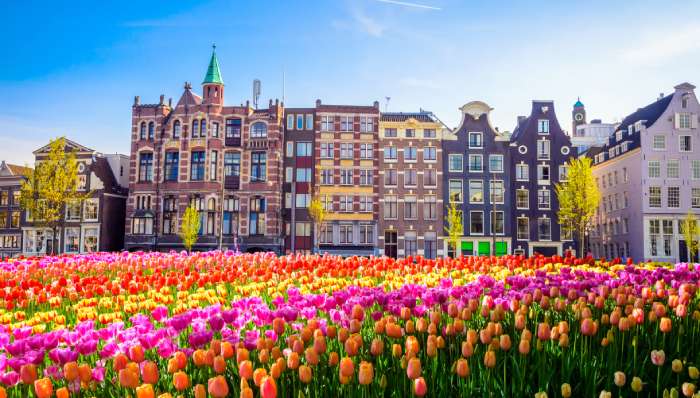 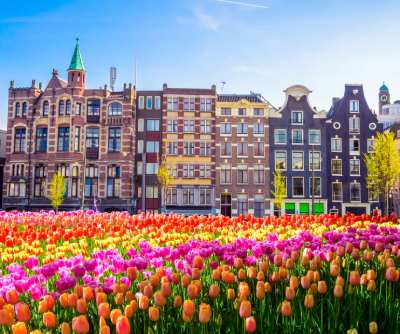 The Dam square and the Royal palace

Another unavoidable location in Amsterdam is the Dam. The simple name meaning ‘dam’ hides the most luxurious and beautiful square in the Netherlands. Created on the first dam on Amstel, Dam is a meeting place for all tourist groups and their interests. Luxury Hotel Krasnopolsky occupies the corner of the plaza, keeping the Red Light District at arm’s length, while an enormous Royal palace rises at the other end.  It is one of three places in the Netherlands that King Wilhelm Alexander calls home. Amsterdam Palace is the largest and dominates the whole area. It was built 400 years ago on as many as 14,000 wooden pylons – a place you must see.

That is not all the Dam can offer because a lavish national monument occupies the central place. The Nieuwe Kerk, the second oldest church in the city, where the current king of the Netherlands got married, is in the immediate vicinity. There is also the Museum of Wax Figures.

The Red Light District, located just a few minutes’ walk from the Dam, is possibly the most famous district in the Netherlands.

Regardless of age and attitude towards prostitution, every foreigner who came to Amsterdam had a peek at what the shop windows in De Wallen are hiding.

De Wallen is the Dutch name for one of Amsterdam’s three red-light districts. It is by far the most famous of them since, unlike the other two districts, it is located in the strict center and is ‘touristic,’ as opposed to those that the Dutch refer to as ‘working.’ De Wallen, for example, is usually visited by tourists. The other two are mostly visited by residents looking for a good time.

De Wallen started growing in the former port hundreds of years ago because sailors have always been the best customers. Interestingly, the oldest church in the city also sprang up in that neighborhood. Oude Kerk was built with money from penance paid by stumbling sailors and ladies of the night, and today it hides the graves of Rembrandt’s wife and children.

De Wallen has changed his face in recent years. Namely, the city authorities want to change the perception of their city – they have drastically reduced the number of shop windows and banned visits to tourist groups in this area.

The Netherlands has the motto “live and let others live,” however, photographing ladies in storefront windows is officially prohibited. If you break that simple rule, in a better case, the girl from the shop window will throw a bottle or an apple at you, and in a worse scenario, you can end up at the police station with a hefty fine.

The red light district is located on the most beautiful part of the canal system, another trademark of Amsterdam. UNESCO also protects this marvel of architecture, and the hosts are incredibly proud of them.

They have been built since the beginning of the 17th century. The basic system consists of four large semicircular canals that embrace the city center: Herengracht (Gentlemen’s Canal), Keizersgracht (Emperor’s canal), Prinsengracht (Prince’s canal), and the Singel canal.

The houses with forward-sloping facades are especially appealing, which the Dutch built to save on the constant lacking space. In any case, driving through the Amsterdam canals is a memorable experience, especially at night. 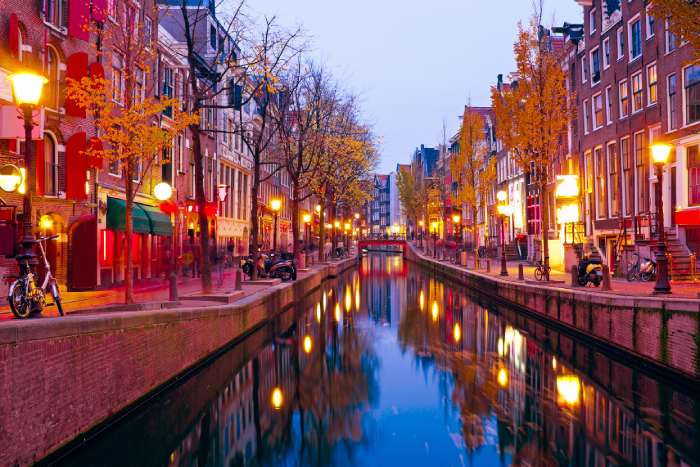 Relatively close to De Wallen is the Jewish Quarter. The Jews are a people who had made an enormous contribution to the great Dutch wealth since the 12th century when they first immigrated to this area.

Always open and liberal, the Dutch opened the door to the Jews when they were persecuted from Spain and Portugal, and they returned it to them many times over. Interestingly, in Amsterdam, even at the time of the worst Jewish persecution in the late Middle Ages, Jews did not live in ghettos but were full members of society. They, in turn, helped the Netherlands develop into a trading superpower.

Even after the Second World War, the Jewish community survived when only a portion of over 140,000 members of this nation survived in Amsterdam. Still, despite that suffering, the Jewish Quarter remained one of the most charming parts of the old city. The former Rembrandt house, where the great artist lived a good part of his life, is also located in this quarter. Today it’s a museum dedicated to the creator of the Night’s Watch. It is also worthwhile to visit the Jewish Museum and the Portuguese Synagogue, which provide a unique perspective on Jewish culture.

It is worth mentioning that this neighborhood is a place where you can buy the most original souvenirs in the city because once a week, there is an open-air fair where locals take out things that they have kept in basements for decades.

WHAT FOODS SHOULD YOU TRY IN AMSTERDAM?

Gastronomy - where to eat in Amsterdam?

Rembrandtplein, i.e., the central part of this neighborhood, is considered the best place to go out in the city. It is surrounded by many restaurants, cafes, and clubs in the city, and along with the nearby Leidseplein, it has the status of a gathering place for a more significant number of people.

These two squares and their immediate surroundings are the best places for a good yet affordable meal. When traveling to Amsterdam, it is good to know that you will find it challenging to find Dutch dishes in the city because Amsterdam is flooded with top foreign restaurants like the rest of the Netherlands.

Traditionally modest Dutch gastronomy has always been based on simple vegetables and fish dishes. Over time, people from all over the world moved to the city, so around these two squares, you can find great Syrian, Argentine, Chinese, and Moroccan restaurants as well as numerous pastry shops and fast-food restaurants.

We recommend that you look for tourist menus that range up to 15 euros, and you can often find all-you-can-eat offers. Vegetarian Arabic restaurants also deserve a recommendation, where you can have lunch for less than 10 euros and try various types of falafel, hummus, and other specialties from the Middle East.

In addition, a variety of pastry shops serve amazing waffles on a buffet basis. You get a waffle and choose the ingredients yourself, which can be an exciting and messy party. Be careful not to get carried away with the toppings; otherwise, the waffle could cost you more than the whole lunch.

Where to smoke weed in Amsterdam?

In addition to food questions, every tourist in Amsterdam needs a good recommendation for coffee shops.

It is a demanding task because every Amsterdamer has a favorite coffee shop like other people have a favorite cafe to drink their first-morning coffee. However, no one will undoubtedly recommend Bulldog to you.

The Bulldog is the largest and most famous franchise of coffee shops in Europe, and the locals treat it like Mc Donalds or Starbucks. If you ask them, the best thing about Bulldogs is that you will get the same quality in each of them, but, on the other hand, that quality is not too high. Their bars are everywhere, especially in De Wallen, but locals prefer smaller coffee shops with a more intimate atmosphere.

Marijuana and hashish cost between 7 and 50 euros per gram. If you want to smoke a joint in the bar, remember that marijuana cannot be combined with tobacco, but there is a container with the herbal combination for rolling on each table.

Although smoking is only permitted in coffee shops, law authorities will not hassle you if you use marijuana on the street as long as you do not create any other problems.

Avoid street dealers who will often offer you hard drugs, and remember that this is a long-term sentence in the Netherlands.

Amsterdam is a city worth visiting at any time of the year; it will enchant and seduce you, so you will always want to come back to it. Just take care not to get knocked into the canal while enjoying its beauties.