Traditional dance, costumes, music, food, and a bench at every 50 meters – welcome to Barcelona – a travel adventure that won’t forget!

Travel deals for a trip to Barcelona 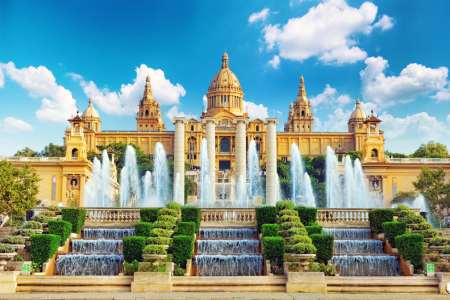 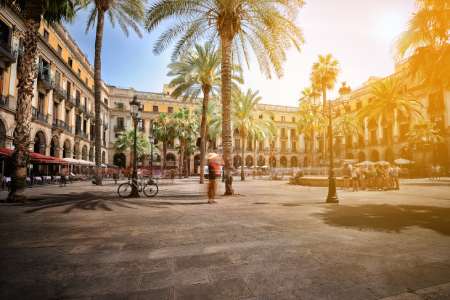 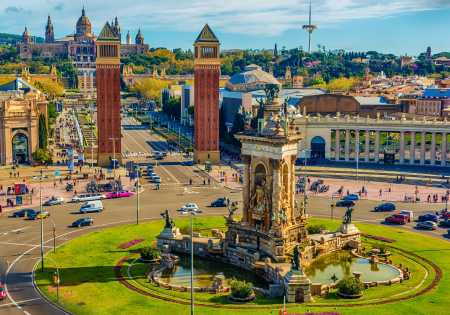 Pack your baggage and positivity for a country where bullfighting is a sport, and the streets never sleep! Welcome to Spain and the city named after Hercules’ lost ship – Barca Nona!

They say that Barcelona is a city to which everyone returns, for the first, second, third time… 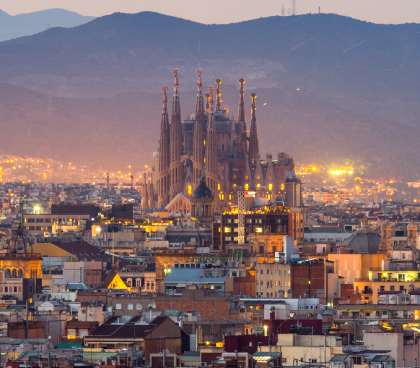 What to visit in Barcelona?

Barcelona, indeed, has a lot to offer, and time needs to be organized wisely. Every street has something specific, and it would be a shame to wander the streets and not know what they are hiding. Barcelona lives from history, which can be felt at every step we give to its streets.

We’ll start with the cathedrals, of which there are many in Barcelona, but we recommend, above all, the following:

It is Spain’s most visited tourist location and the most rewarding to see. The construction of this church began in 1882 (and is still going on) by Antonio Gaudi, who is buried there.

When the term (Sagrada Familia) is translated, it means “Holy Family,” and all details are related to the Bible. One side signifies life, while the other depicts death. It is one of Spain’s most magnificent examples of modernism.

One of the mysterious things about the building is that a square on it contains numbers that always add up to the number 33 – the number of years that Jesus was when he died.

Give yourself enough time to explore this masterpiece of architecture that is also one of the UNESCO World Heritage Sites. It is one of the places that will leave a huge impression that will not fade from memory for years. Gaudi’s creations are visited by more than three million tourists a year.

Tickets can be purchased online at the following web address: https://sagradafamilia.org/en/

The Casa Mila is the most distinctive building not just in Barcelona but also in Spain.

It is one of the best creations that Gaudi has made.

He plays with shapes, colors, and materials. His creations stand out from the rest; they still live today and attract tourists from all over the world. Indeed, they leave no one indifferent.

Gaudi belonged to the artistic direction of secession, i.e., Art nouveau, also known in Catalonia as Catalan modernism. If you pay attention, you will see that you can find curved lines almost everywhere; there are no sharp angles. There are also different materials and colors to break the monotony. 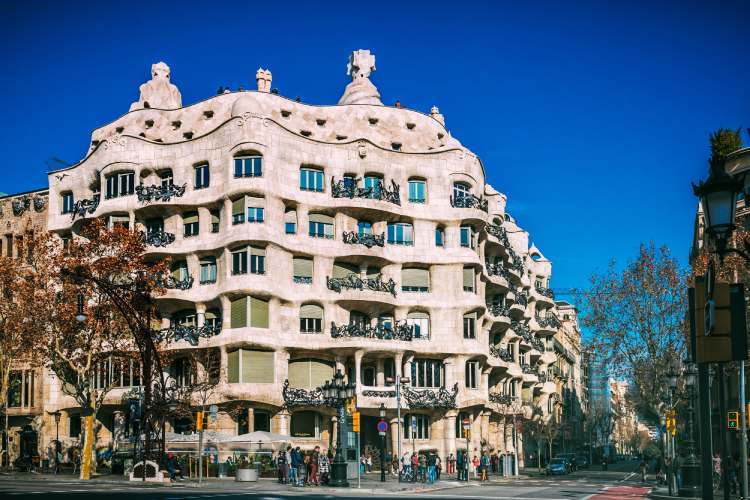 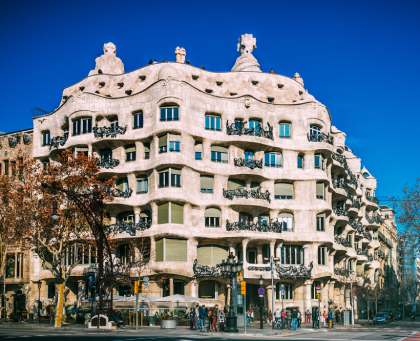 Camp Nou, the famous football club Barcelona stadium, should not be missed when visiting Barcelona. The name of the Camp Nou stadium translated from Catalan means “New Country”. You can choose the ticket price yourself, and it depends on several factors. It is best to book tickets online to avoid crowds at the very entrance to the stadium.

The stadium can accommodate close to 100,000 people and is one of the largest stadiums in the world. Tickets can be purchased and paid at the following link: https://www.fcbarcelona.com/en/tickets/camp-nou-experience

There is a museum and shop center within the stadium (which is huge) where you can find all the fan equipment (T-shirts, balls, hats, flags, sneakers, gloves, magnets, various souvenirs). Upon entering the stadium, certain personnel is assigned to photograph you at the stadium entrance, with a model of your chosen player and the club’s trophies. When you finish touring the stadium, a worker will be waiting for you at the exit, offering you an album with your pictures. If you like the pictures, you can buy the album.

You can also see all the trophies that the club won in the museum. In addition, there are also large monitors with sofas in front. You can experience complete comfort while watching the best goals and masterful moves of the players of the Barcelona football club.

For the biggest fans of this club – the stadium also organizes various games in which you can participate.

Even though it’s enormous, you can’t get lost at the stadium. The entire stadium is covered by staff who take care of you (although there are guidelines where you can go) and that you do not get lost and leave the stadium safely.

In addition to the mentioned stadium, there is also the Olympic Stadium, which is also worth visiting. The stadium was built for the needs of the 1992 Olympic Games.

Near the stadium, the Montjuic viewpoint offers an extraordinary view of the city and gives the city a completely different dimension.

The Gothic Quarter leaves no comment for several reasons. Narrow streets, which will significantly contrast La Rambla, are paved with cobblestones and send you to an entirely different Gothic world. The houses in this neighborhood are like from a fairy tale, and in the same part, there is the Picasso Museum, which must be on the list of priorities when we talk about this part of the city.

The Picasso Museum is an unforgettable experience and contains an extensive collection of works by Pablo Picasso from his student days. If you want to visit the museum, don’t forget that the museum is open to visitors every day except Mondays.

Tickets for the Picasso Museum can be found at this link. 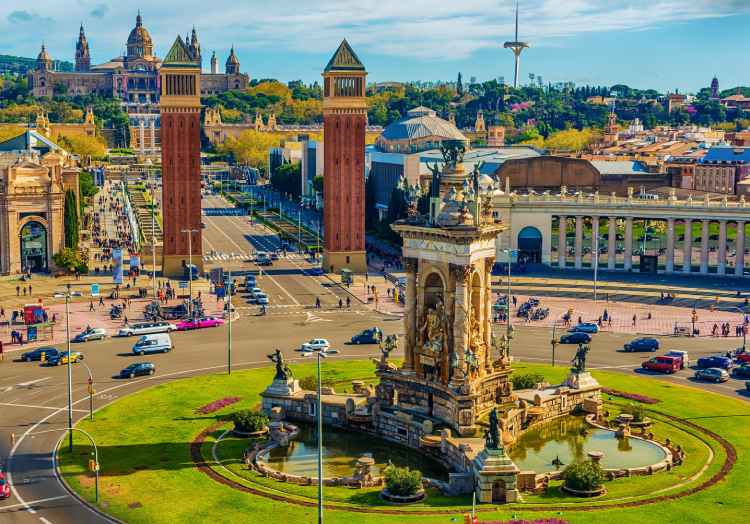 What else to see in Barcelona?

Plaza Catalunya is one of the most beautiful places in Barcelona. It deserves special attention and emotion. It seems that every part of this square is in place and that nothing needs to be changed.

Beaches and swimming in Barcelona

Barcelona is a excellent choice for sea lovers, as the sea originally encompassed most of the city. In Barcelona, you will receive a package of history, a wonderful time, delicious food, and great beaches.

According to research conducted by National Geographic, Barcelona has the most beautiful city beaches! There are changing cabins on each beach, so you can tour the city and stop by to take a swim. After that, you can continue the tour.

In front of each cabin stands someone guarding the cabin. If you don’t have money with you at that moment, you don’t have to pay to enter the cabin! And if you get tired on the beach, at least one masseuse will pass every 10 minutes (mainly from Indonesia) who offers massage services for less than 5 euros.

The Spaniards also used a large amount of water for an Aquarium for which they use as much as four million liters of water, which also contains over four thousand species of different fish. Certainly, the biggest attraction are the sharks!

What gives them a significant advantage is a large number of benches, parks, and places to rest and chill that are great after sightseeing.

One of the best places to chill in Barcelona is Citadel Park, which contains an artificial lake, and the good thing is that you can even rent a boat on the lake. The right place to relax and complete the experience.

The street that divides the city in two, La Rambla, is the epicenter of all events, where life and architecture take on a whole new and different dimension. There is also a legend related to this street – if you drink some water from the fountain in it, you will surely come back again. The name of the street in Arabic means sand – because it used to be covered with sand. 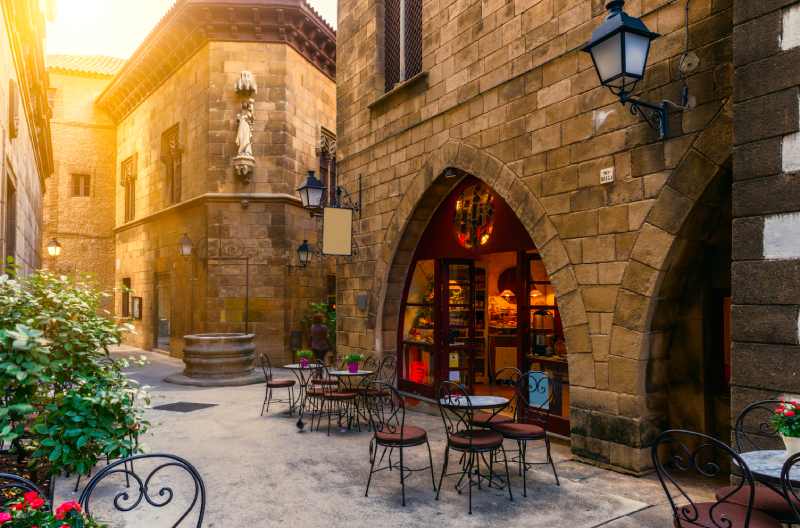 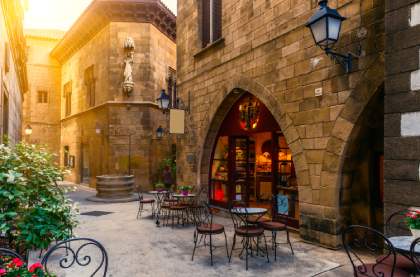 Gastronomy - food and drink in Barcelona

One thing is certain: in Spain, you eat, drink, and enjoy yourself!

There are good places for a perfect meal at almost every step. You don’t need to be a food-lover to enjoy Spanish specialties. Gastronomy is one of the things that keeps Spain at the very top of the list in terms of the number of tourists who visit one country.

The tradition of good Spanish cuisine brings a variety of dishes worth trying. The soul of any location can be perceived more effectively through food. 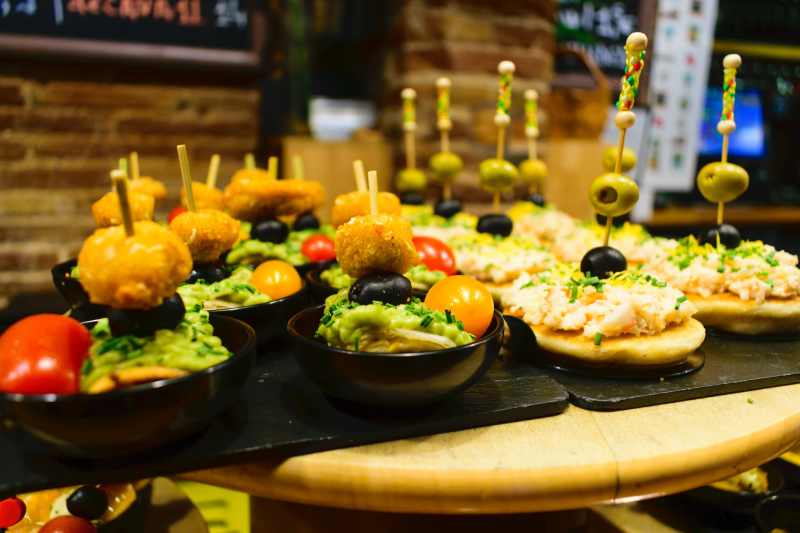 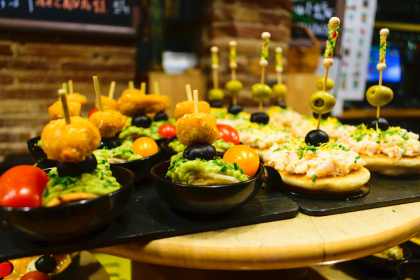 We recommend the following Spanish specialties:

As a treat, we recommend Churros – a favorite dessert of the Spaniards! And as an accompanying addition to every dish: sangria, Sherry (Vino de Jerez), or Cava (the Spanish sparkling wine)

In addition to exclusive restaurants, excellent and varied food can be found at La Boqueria, which can offer you everything you are looking for and even more!

There is a great chance that as much as 70% of the products offered will be completely unknown and challenge you to try some completely new, exciting, and exotic flavors. In addition to fruits and vegetables, local specialties can be bought for three, four or five euros at this market. 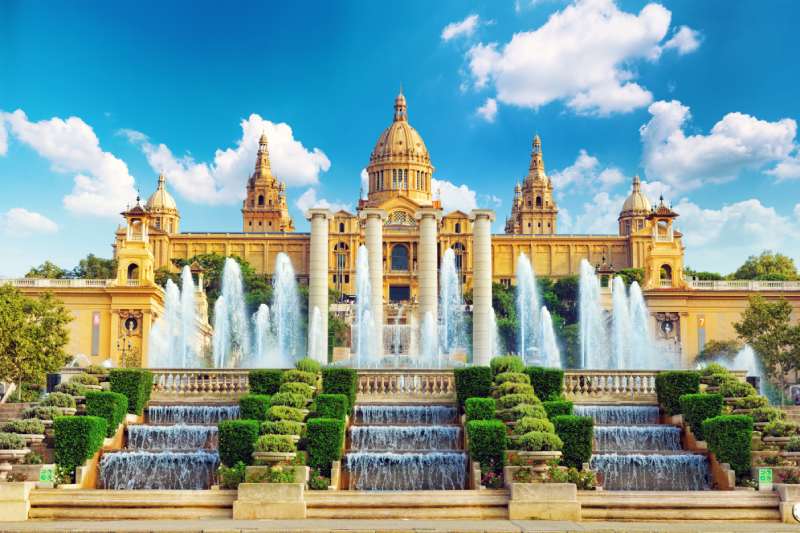 Traveling to Barcelona with kids?

Although at first glance Barcelona does not seem like a city that is one of the most suitable for visiting with children, at second glance you will surely change your mind! A combination of history, tradition, dance, acting, sports, street art, culture, and great enjoyment! A city that certainly has a lot to offer children.

It should be noted that many museums, parks, entrance centers have huge discounts for children or an additional discount if you buy tickets for more family members.

Places we recommend for sightseeing with children: 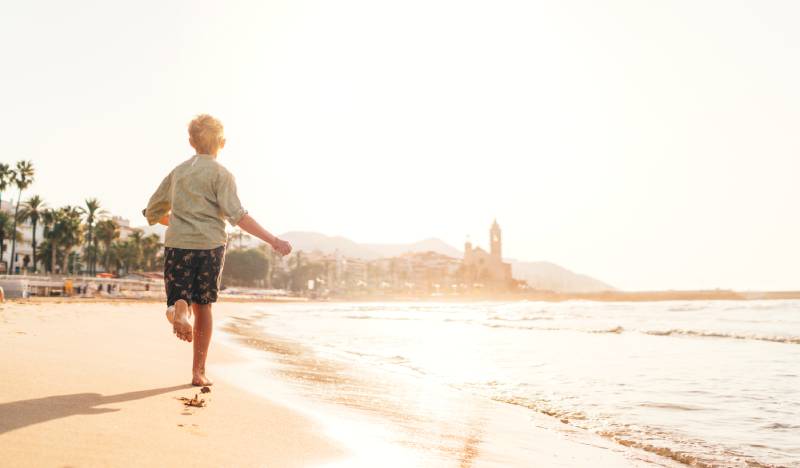 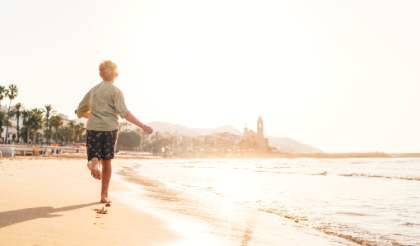 The great thing about Barcelona is that there are many department stores with products at low costs, and the selection is, of course, extensive.

Prices cannot be compared to prices in other countries and cities in Europe, which places Spain high in the rank of countries with affordable shopping prices.

First of all, the Mango outlet is unavoidable, especially if you come across a discount. You can find items that are up to 80% off. Mango’s biggest competition is certainly Zara, which is located near almost every square in Barcelona.

Lefties stores are at almost every step. We recommend the one in La Rambla, which is huge and contains both men’s and women’s assortment. A shop near the Columbus Monument also offers a large selection. Bring an empty suitcase, the choice is enormous, and the prices are more than affordable!

In addition, many street vendors in Barcelona offer various things, but you can bypass them.

Why do tourists keep coming back to Barcelona?

The answer is simple: everyone finds something for themselves in this city. Beauty and an incredible feeling of passion and freedom. A place to enjoy!

Barcelona does not separate different ages and tastes. The city is built for everyone, and one thing is for sure: it won’t leave you indifferent, and you cannot visit it only once. Barcelona is a city to which people return and where people live in peace. And in love. And it’s all Barcelona. And much more than that.